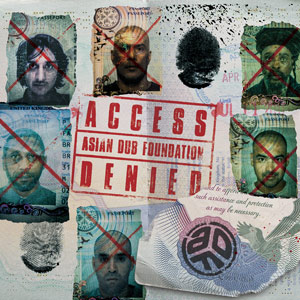 AVAILABLE HERE
New video “Coming Over here Feat Stewart Lee”: Anybody black or Asian person brought up in the UK especially during the 70’s and 80’s will understand the fierce satirical jibes that underly this track. The vocals are provided by Stewart Lee, one of Britain’s foremost comedians brilliantly parodying the tropes of UK anti-immigrant racism, backed by ADF at their fiercest. Nouvel album “Access Denied”: Thunderous. Uncompromising. Radical. One of the most original and influential bands of the last thirty years, Asian Dub Foundation return with their ninth studio album “Access Denied”. Access Denied is can avalanche of wildstyle jungle punk, orchestral drum’n’bass, Indo-ragga dub and militant-lyrical soundclashing confronting themes surrounding Brexit, hostile border policies and the climate crisis. Featuring contributions from a quite formidable cast of trailblazing activists, artists and agitators, including voice of a generation Greta Thunberg, Palestinian shamstep warriors 47Soul, Chilean vocalist and voice of recent protests in Chile, Ana Tijoux, beatboxer and vocal extraordinaire Dub FX, as well as the shrewd UK comedian Stewart Lee, ADF form an unprecedented union of voices unlike any album that has come before. Following years of damaging public sector cuts and emboldened by nationalist politics and swathes of opposition to multiculturalism, the UK, many would argue, is in dire need for a global reset, still the enigmatic ADF crew have long forewarned the arrival of this day years before, the group’s 2003 track Fortress Europe coming to mind. Nevertheless, Asian Dub Foundation break new ground with devastating effect on Access Denied (announced the day the UK left the EU), a booming fourteen-track collision of seminal contemporary thought and daring sonic vision. “Access Denied” OUT NOW (vinyl, CD) :https://www.xrayproduction.com/en/categorie-produit/asian-dub-foundation-en/ “Access Denied” streaming : https://smarturl.it/ADFAcessDenied
This website uses cookies to improve your experience. We'll assume you're ok with this, but you can opt-out if you wish. Cookie settingsACCEPT
Privacy & Cookies Policy